It was 1922, and a 23-year-old Ernest Hemingway had just experienced one of the most devastating blows to his writing career.

A blow so devastating that he did not think he could ever write fiction again.

In fact, he seriously considered giving up on his dreams of becoming a famous novelist.

But eventually something within him drove him back to his typewriter.

Are there obstacles, interruptions, and distractions threatening to sabotage your writing goals in the New Year? Here’s what Hemingway can teach us about remaining dedicated to our craft even when life seems set on undermining our plans. END_OF_DOCUMENT_TOKEN_TO_BE_REPLACED

Have you ever started writing a story or a blog post and felt like it wasn’t turning out the way you had envisioned it in your head?

The words aren’t flowing quite the way you would like. Yet, you spent so much time working on it, that you decide to hit publish.

And your audience loves it.

In fact, they love it even more than anything else you have written. They demand more of the same.

What are you to do? Is your writing really as bad as you think?

END_OF_DOCUMENT_TOKEN_TO_BE_REPLACED

Two exciting things happened in New York this past Wednesday: the Mets won the National League pennant, and I saw my first performance at the Metropolitan Opera. Yes, that’s right. I missed seeing the Mets claim their first World Series spot in fifteen years, but it was worth it. Puccini’s Tosca was absolutely breathtaking. END_OF_DOCUMENT_TOKEN_TO_BE_REPLACED

Recently, I have started listening to podcasts rather than music while working out. I have found this to be a wonderful way to take full advantage of those thirty minutes and learn something new. Though I’ve only listened to a handful of episodes so far, I have been greatly enjoying Michael Hyatt’s weekly podcast This is Your Life. It may all be down to his excellent episode on perfectionism that has completely transformed the way I have been approaching various projects. END_OF_DOCUMENT_TOKEN_TO_BE_REPLACED 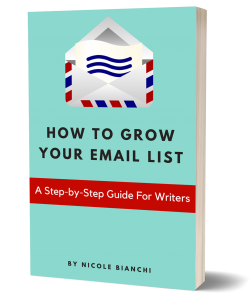 “If I could go back and change one thing about my writing career…I would have started an email list from day one. You should do the same. And this book is the perfect guide to help you.”