Charlotte Brontë dips her pen in the inkwell and begins to write. She and her sisters, Anne and Emily, have brought their desks into the parlor and are busy working on their stories. The rain taps soothingly on the windows of the parsonage, and Charlotte pauses from her work to stare out into the garden. Though she feels in her heart that this is the best story she has ever written, she still fears that the publishers might turn it down as they did with her last manuscript.

The gentle scratching of her sisters’ pens against paper rouses her from her thoughts. Shaking off her doubts, she examines the paragraphs in front of her. There isn’t time to worry about the future — she must only worry about putting her words on paper and getting her protagonist Jane out of this latest predicament with Mr. Rochester.

That was how I envisioned Charlotte Brontë, the author of Jane Eyre, as I gazed at her portable writing desk last December. No, I hadn’t been transported back to the 1840s to her home in West Yorkshire, England. (I wish I had, just for an afternoon! I would have loved to have taken tea with Charlotte and talked about writing with her and her sisters.)

Rather, I was visiting the Morgan Library & Museum in New York City for a special exhibition celebrating the 200th anniversary of Charlotte’s birth in 1816.

Here’s the photo I took of Charlotte’s writing desk (the desk had traveled all the way across the pond from the Brontë Parsonage Museum): 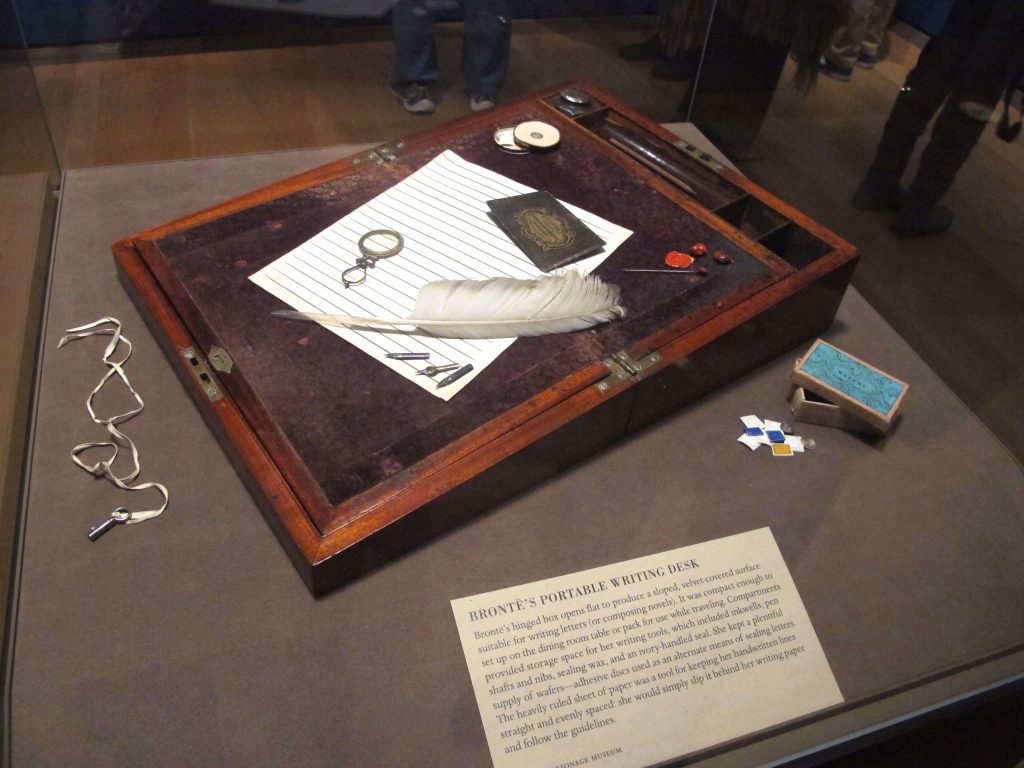 My brother Michael, who had come with me to see the exhibition, remarked, “Isn’t it amazing how Charlotte Brontë wrote so much with such simple writing tools? No computer with a fancy Scrivener app. Just a quill pen and paper.”

I had to agree. Here’s a photo I took of the manuscript of her first novel, The Professor. 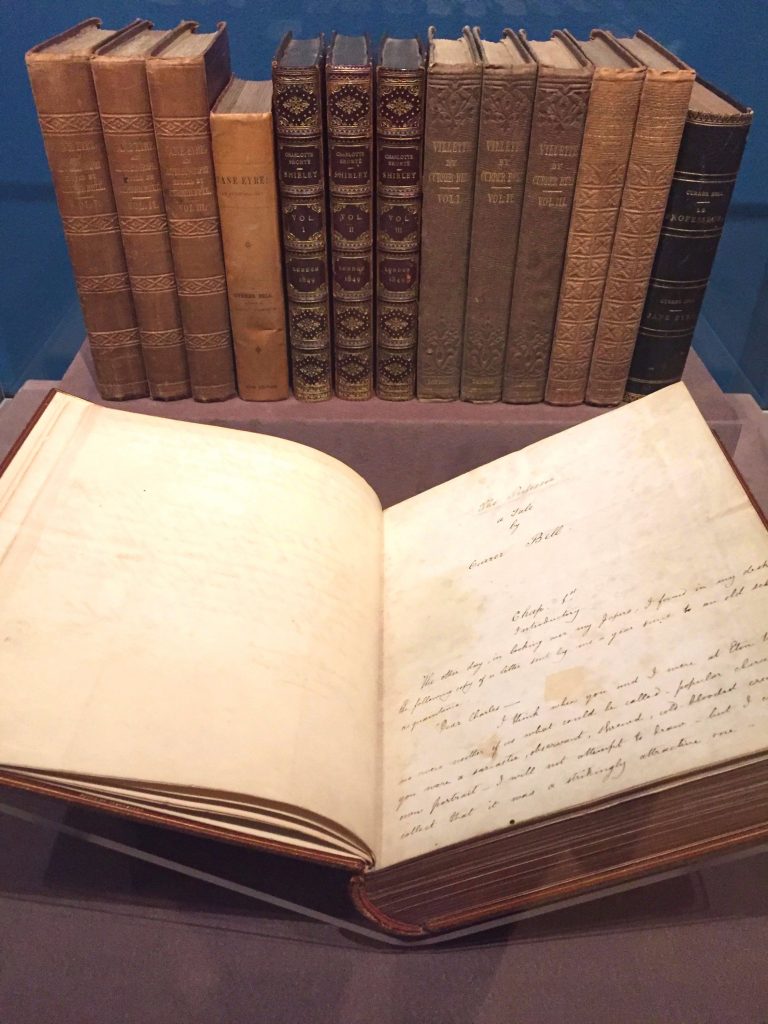 Imagine writing all of that by hand! No copy and paste. No spell checker. No convenient backspace button.

And, yet, Brontë was prolific. Her writing desk had witnessed the creation of countless stories, all patiently transcribed with pen and ink from her imagination to the page. She published four novels as an adult, but she had been practicing her craft ever since she was a child.

Here’s a photo of one of the miniature books she made when she was twelve: 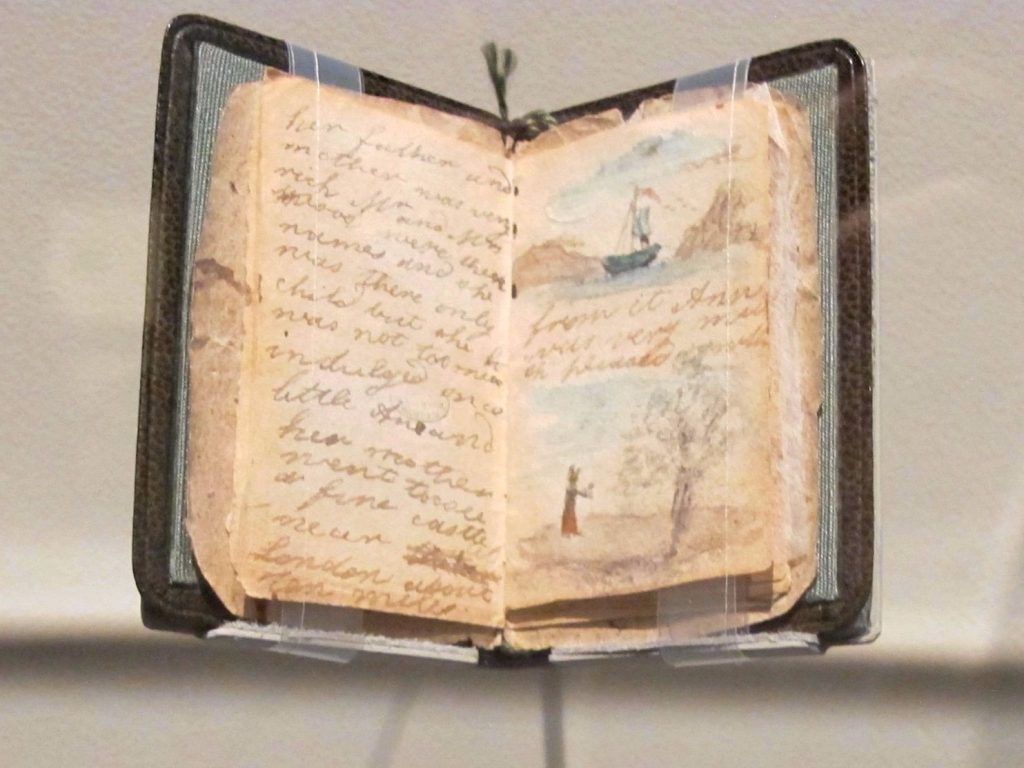 Of course, Brontë faced many more challenges than just rudimentary writing tools. One of the biggest was the sexism in the literary circles of her time.

At twenty years old, she sent a poem to the Poet Laureate Robert Southey and asked his opinion of her writing. He read Charlotte’s poem and kindly replied, praising her work but also warning her,

Literature cannot be the business of a woman’s life, and it ought not to be.

However, he did not discourage her completely, advising,

Write poetry for its own sake; not in a spirit of emulation, and not with a view to celebrity: the less you aim at that, the more likely you will be to deserve, and finally to obtain it.

Perhaps Brontë took the poet’s words as a challenge. In any case, she kept writing stories and poems, drawing on her own life experiences as a governess to enrich her work. When publishers rejected her first novel, she wrote a second one, Jane Eyre. That novel found a publisher.

In an effort, however, to make sure her work would be judged on its merits alone, Charlotte wrote under the male pen name Currer Bell. Here are the original paperback editions of Jane Eyre published with Currer Bell as the author: 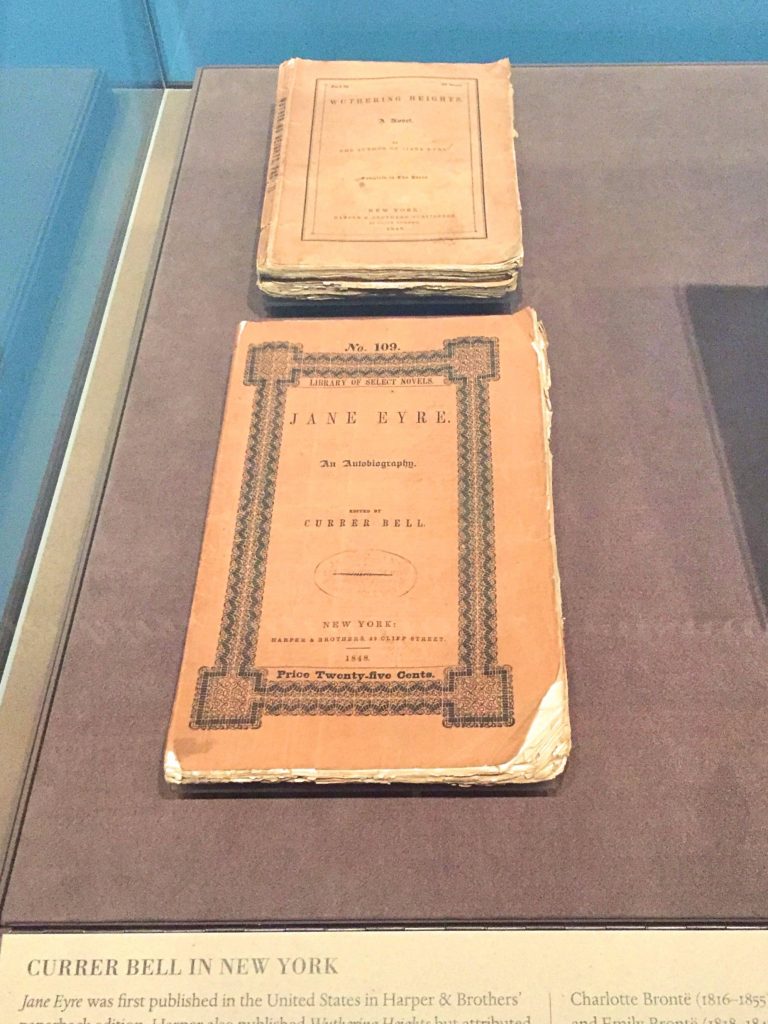 Despite Charlotte’s precautions, the critics soon guessed that a woman had written the book. Many were savage in their reviews. They believed that the themes Brontë wrote about were not seemly for a woman. Brontë lamented in a letter to her editor,

I am reminded of the Economist. The literary critic of that paper praised the book if written by a man, and pronounced it ‘odious’ if the work of a woman. To such critics I would say, ‘To you I am neither man nor woman. I come before you as an author only. It is the sole standard by which you have a right to judge me–the sole ground on which I accept your judgment.’

In defiance of the critics’ harsh words, Jane Eyre became one of the most successful novels of its day. The painstaking craftsmanship and power of the story ensured that it rose above the controversy.

Charlotte’s sisters’ novels, Wuthering Heights and The Tenant of Wildfell Hall, were also literary sensations (some of Anne’s and Emily’s writings were on display at the exhibition too). The Brontës eventually revealed their identities, but sadly all died young before they could truly enjoy their literary success and gift us with more wonderful stories.

As I strolled through the exhibition, I realized how blessed we are to live in an age when anyone can be an author.

If you were a woman during the Brontës’ time, your literary career would be completely up to the whims of a publisher (and most likely a male publisher, at that). Today, however, if a publisher rejects your manuscript, you can easily self-publish it and still get your book into the hands of readers.

Additionally, any woman from anywhere around the globe can start a blog, carve out her space online, and begin sharing her thoughts and ideas with an audience.

One of the reasons women writers today have the opportunity to make their voices heard is because of the relentless determination of authors like Charlotte Brontë.

Charlotte didn’t let anything distract her from telling her stories. She wasn’t going to let anyone dictate to her whether or not she could be a writer. She knew she was born to be a writer.

In a journal that Charlotte kept while a governess, she resolved,

I’m just going to write because I cannot help it.

Her perseverance paid off. The stories she wrote touched the hearts of generations of readers, and her success as an author inspired countless girls during the Victorian era who also dreamed of becoming writers one day. And not only Victorian girls. I read Jane Eyre for the first time when I was thirteen, and I too was inspired by the confident Jane who forges her own path in the world.

Imagine if Charlotte had listened to her critics. What if she had agreed that women shouldn’t be writers, and she had never attempted to get her work published? We would have lost out on her unique perspective of the world: a perspective that said strong, spirited women could influence the world for good.

As I left the exhibition, I took one last look at Charlotte’s desk. We all have unique stories that only we can tell. As Charlotte said, let’s keep on writing because we cannot help it.