Do you ever begin to feel tired and have difficulty focusing on your creative projects as the afternoon wears on?

In the late afternoon when I begin to feel my creative energy take a nosedive, I pause from my writing projects to enjoy tea time with my family. This is a tradition passed down to us from my British grandmother.

She saw afternoon tea as just as important a time in the day as breakfast, lunch, and dinner. I remember a conversation I once had with her when she was telling me about her experiences as a child in London during WWII.

Her family eventually sent her to the countryside during the Blitz, but she remembered before that how they would sit together in an Anderson shelter in their neighbor’s yard. She told me they put the kettle on before heading to the shelter. When the kettle whistled, one of her sisters dashed to the kitchen to prepare the tea and brought it back to the shelter.

Clearly, not even a war could come between a Londoner and her tea. The tea must have helped my grandmother cling to a sense of calm and normalcy as she waited out the air-raid warning.

In fact, when I did a little digging into the benefits of tea, I discovered that thanks to a special ingredient, tea really does relax you. Additionally, because it has less caffeine than coffee, it doesn’t cause caffeine jitters that mess with your focus and concentration. But it does give you a boost of creative energy.

Maybe this is why so many of us writers like to drink a cup of tea while we are writing.

Read on to discover several of the famous writers who loved tea and how tea can improve your health and enhance your creativity.

For many famous writers, tea is an essential part of their daily routine and writing process.

Stephen King noted in an interview how he often has a cup of tea when he starts writing, “There are certain things I do if I sit down to write…I have a glass of water or a cup of tea.”

Henry James opened his novel The Portrait of a Lady with the line, “Under certain circumstances, there are few hours in life more agreeable than the hour dedicated to the ceremony known as afternoon tea.”

George Orwell wrote an essay titled “A Nice Cup of Tea” and remarked, “Tea is one of the main stays of civilization in this country.”

And C. S. Lewis once mused, “You can never get a cup of tea large enough or a book long enough to please me.”

I would choose always to breakfast at exactly eight and to be at my desk by nine, there to read or write till one. If a cup of good tea or coffee could be brought me about eleven, so much the better.

…At one precisely lunch should be on the table; and by two at the latest I would be on the road. The return from the walk, and the arrival of tea, should be exactly coincident, and not later than a quarter past four. Tea should be taken in solitude…For eating and reading are two pleasures that combine admirably…At five a man should be at work again, and at it till seven.

While many of these writers grew up enjoying afternoon tea as a cultural tradition, recent scientific studies suggest that tea might have also helped them fuel their creativity.

How Tea Can Improve Your Health and Boost Creativity

Okakura Kakuzō, a Japanese scholar and the author of The Book of Tea, observed, “Tea began as a medicine and grew into a beverage.”

Centuries before the British were sipping afternoon tea in their parlors (or in their Anderson shelters like my grandmother), people around the world were drinking tea as a health tonic. Scientists attribute the health benefits of tea to compounds called polyphenols. These are potent antioxidants that are important for keeping your body healthy.

But how does tea help you think more creatively?

Tea has a moderate amount of caffeine, but the true creativity-booster is something called L-theanine. This is a naturally occurring amino acid found almost uniquely in tea. It allows you to experience the benefits of caffeine while also relaxing you. Pretty cool, right?

Here’s how it works:

Additionally, tea may lower cortisol levels, meaning that it may help you relieve stress and thus think more clearly.

Overall, tea is a wonderful, healthy beverage when you are working creatively, especially when you feel your energy begin to dip in the afternoon. It relaxes you while also increasing your cognitive ability.

How I Include Tea in My Writing Routine

I usually drink a cup of tea earlier in the day while working on my writing projects and then again at tea time later in the afternoon.

Japanese sencha is my favorite kind of tea. (Green tea has a host of health benefits.) I love the organic sencha from Eden Foods that comes in tea bags. Many tea manufacturers’ bags can contain harmful chemicals, but Eden Foods makes their tea bags out of unbleached manila fibers.

During afternoon tea, I like to take a break from the computer and social media. Often, I’ll enjoy a small bowl of yogurt (Greek yogurt by Wallaby Organic is my current favorite). While sipping my cup of tea, I’ll usually indulge in a little dark chocolate too. Green tea and chocolate are a heavenly combination.

Afternoon tea is the perfect time to relax and let my brain renew its creative energy after working hard all day. I might chat with my family or read a book or just enjoy some quiet time to ruminate over my projects.

If, then, I were asked for the most important advice I could give, that which I considered to be the most useful to the men of our century, I should simply say: …stop a moment, cease your work, look around you.

Taking a break for afternoon tea allows you to do exactly that.

Is tea part of your writing routine? What is your favorite kind of tea? Let me know in the comments, and please share this post with a friend if you enjoyed it. You can use the image below to share on Pinterest. 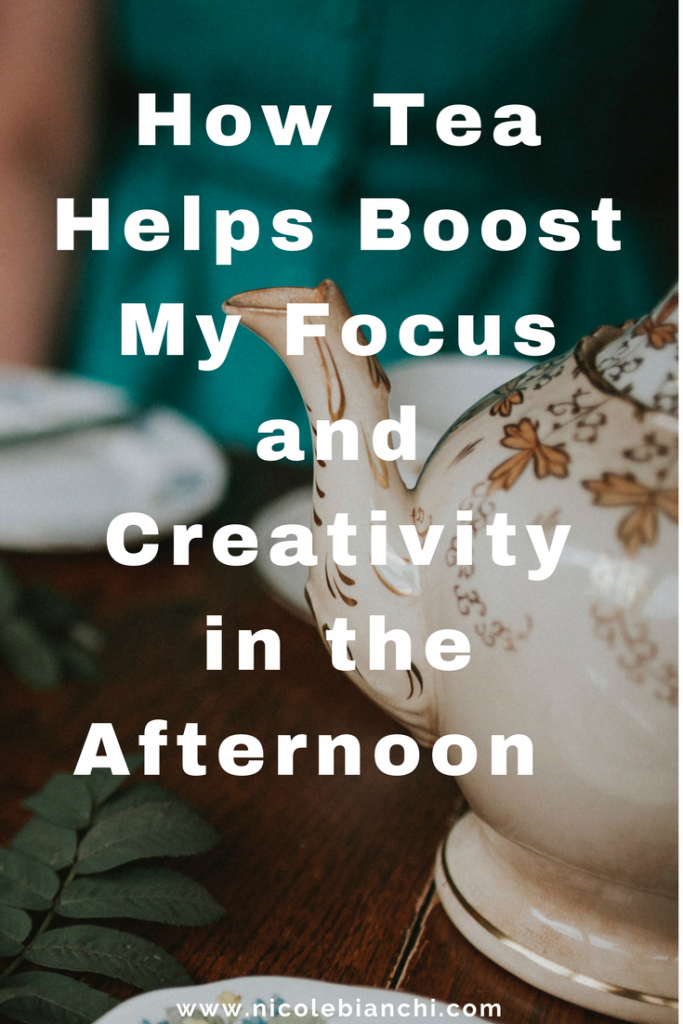