You’re out to dinner with friends (none of whom are writers), and everyone’s answering the question, “What have you been up to lately?” Your friends talk about their jobs or upcoming trips, and then it’s your turn to answer.

Excitedly, you begin to explain how your blog is growing and that you’ve been asked to guest post. Or you tell them that you’re in the midst of plotting your new novel.

Then you get that look. You know the look. The bored look that’s usually followed by, “That’s cool.” And then they quickly change the subject.

You feel slightly disheartened. But you’re used to it by now.

You’re a writer, and you’ve come to learn that seldom do non-writers share your passion. Your friends might be supportive of your writing endeavors, but they don’t really understand what you’re doing.

What’s a writer to do? Though you love writing, it can sometimes feel a little lonely.

You’d love to have some friends to bounce ideas off of, who could help you brainstorm new strategies for getting your first 1,000 email subscribers, who could read your latest story and suggest how you can fix that glaring plot hole.

Many writers have been in the exact same situation as you. Their solution?

They do what C.S. Lewis did when he created The Inklings. They form a mastermind group with fellow writers.

When I started this blog back in 2016, I was desperate to find friends and colleagues who shared my passion for blogging and writing. Then the opportunity came.

I was participating in an online coaching program for bloggers with a bunch of very cool people. The other students and I decided to form a mastermind group, and since then, we’ve been meeting every other week to set goals, keep each other updated on our projects, and provide each other feedback.

Not only do I not feel alone anymore, but the group has also provided me with additional accountability as I pursue my blogging and writing goals.

Often during a mastermind conference call when I express my discouragement over a blogging project, it turns out someone else in the group is facing similar struggles. Because of our shared experience, we can sympathize with each other, support each other, and encourage each other. And the members of the group are always there to offer me lots of new ideas and blogging strategies to try.

If you want to grow as a writer and are looking for encouragement and accountability, I highly recommend starting a mastermind group.

What is a Mastermind Group?

The word “mastermind” was coined by Napoleon Hill in the 1920s and later popularized in his book Think and Grow Rich. Hill argued that when two people come together to solve a problem, their combined wisdom forms a “master mind”. He urged budding entrepreneurs to form mastermind groups (or “alliances”, as he called them) where they could keep each other accountable to their goals and give each other advice about their projects.

I’m not a fan of Hill’s books, but I do like his term “mastermind”. There’s something special that happens when everyone in the group puts their heads together and helps brainstorm how to solve a member’s problem. As Proverbs 15:22 says,

Without counsel plans fail, but with many advisers they succeed.

Indeed, while Hill may have coined the term, mastermind groups have been around for a long time. Writers throughout the centuries have recognized the importance of meeting with other serious writers to discuss their work, collaborate, and help each other improve their craft.

The Inklings is one of the best-known writers mastermind groups. Headed by C. S. Lewis and J. R. R. Tolkien, the group gathered on Thursday evenings at Lewis’s rooms in Magdalen College. Later on, they would also meet for lunch at a local Oxford pub called The Eagle and Child.

The members of the group came together to share ideas and receive feedback on the latest drafts of their novels. Tolkien, for example, read aloud from a manuscript that would eventually become The Lord of the Rings.

We were no mutual admiration society: praise for good work was unstinted, but censure for bad work – or even not-so-good work – was often brutally frank.

By receiving an outside opinion on their work, the writers were able to rewrite passages and develop their story ideas even further. If a story had stalled and they weren’t sure how to continue, the other members could suggest new plot twists and encourage them to keep pressing forward with their writing.

C. S. Lewis said of his fellow Inklings members, “What I owe to them is incalculable.”

Clearly, these writers knew that there was strength in numbers.

Three Tips for Starting Your Own Mastermind Group

If you want to start your own mastermind group, here are three tips:

The members are the most important element of a successful mastermind group. Everyone should be serious about improving their craft and be committed to showing up to the meetings.

It’s also usually best if your members all have a similar level of experience (or if each member has a particular area of expertise). That way you can all challenge and learn from each other.

Additionally, you want members that you can trust and confide in as you will be sharing your struggles and your in-progress work.

You don’t need to have a large group. Small groups are probably better as you will have more time to devote to giving feedback to each member. You could even start your group with only one other person.

Where to find members for your mastermind group? You could start with your circle of friends or reach out to your professional network or even fellow writers you’ve met online (as I did). For example, you can join my private Facebook group to connect with other writers.

2. Determine how & how often you will meet

It’s important to determine whether you’ll meet in person or online. Naturally, this will be an easy decision if some of your members live out of state or even in another country.

However, even if all of your members live within driving distance, it’s a good rule of thumb to choose the most convenient option for everyone. Meeting online might still be more feasible with everyone’s schedules. This will give your mastermind group a greater chance of success.

My mastermind group meets online through a video conferencing software called Zoom. We can either join the meeting through our computers or call in with our phones. Skype and Google Hangouts are two other platforms you can use to hold meetings online.

Once you’ve agreed on how you’ll meet, it’s critical to determine what time and how often. My group holds our meetings on the same day and time every other week. You might want to choose every week or just once a month. But, above all, pick a consistent day and time that people can commit to in advance.

And be prepared to work hard to keep your group alive, especially in the first several months. Groups often die if no one takes the initiative to follow up and reschedule missed meetings.

3. Have a planned structure for your meetings

Planning out the structure of your meetings in advance will help you make the most of the time you have. My group usually begins with each member giving us an update on his or her projects and sharing a success. Then one member will be able to request the “hot seat” and get help with brainstorming how to overcome a specific struggle.

My current mastermind group doesn’t focus on critiquing each other’s writing. However, I have been part of mastermind groups where we gave each other feedback on our fiction writing, and we followed a similar structure to the one above.

Regardless of how you structure your meetings, I recommend having one member facilitate the meeting, keep track of time, and make sure everyone stays on schedule.

Writing can be a lonely activity. Mastermind groups give writers a sense of community and a sense of belonging.

You’re surrounded by fellow writers who have faced the same struggles as you and can share their wisdom and encouragement. They will make sure you stay on track to complete your projects, that you continue sharpening your skills, and that you don’t give up on your dreams.

Are you part of a mastermind group? Or would you like to start one? Let me know in the comments. 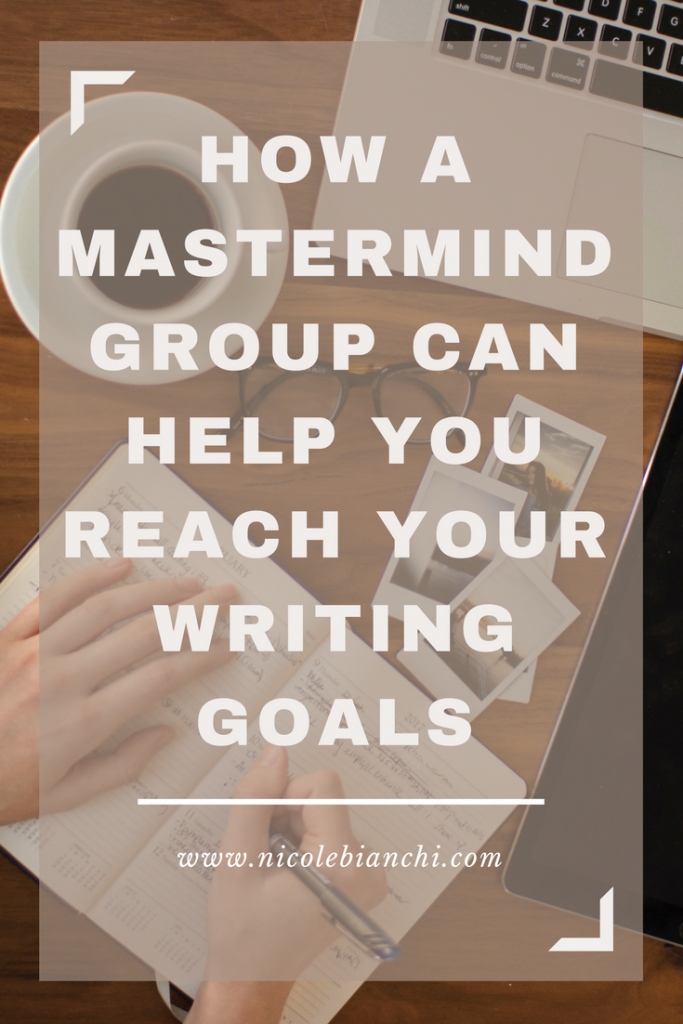