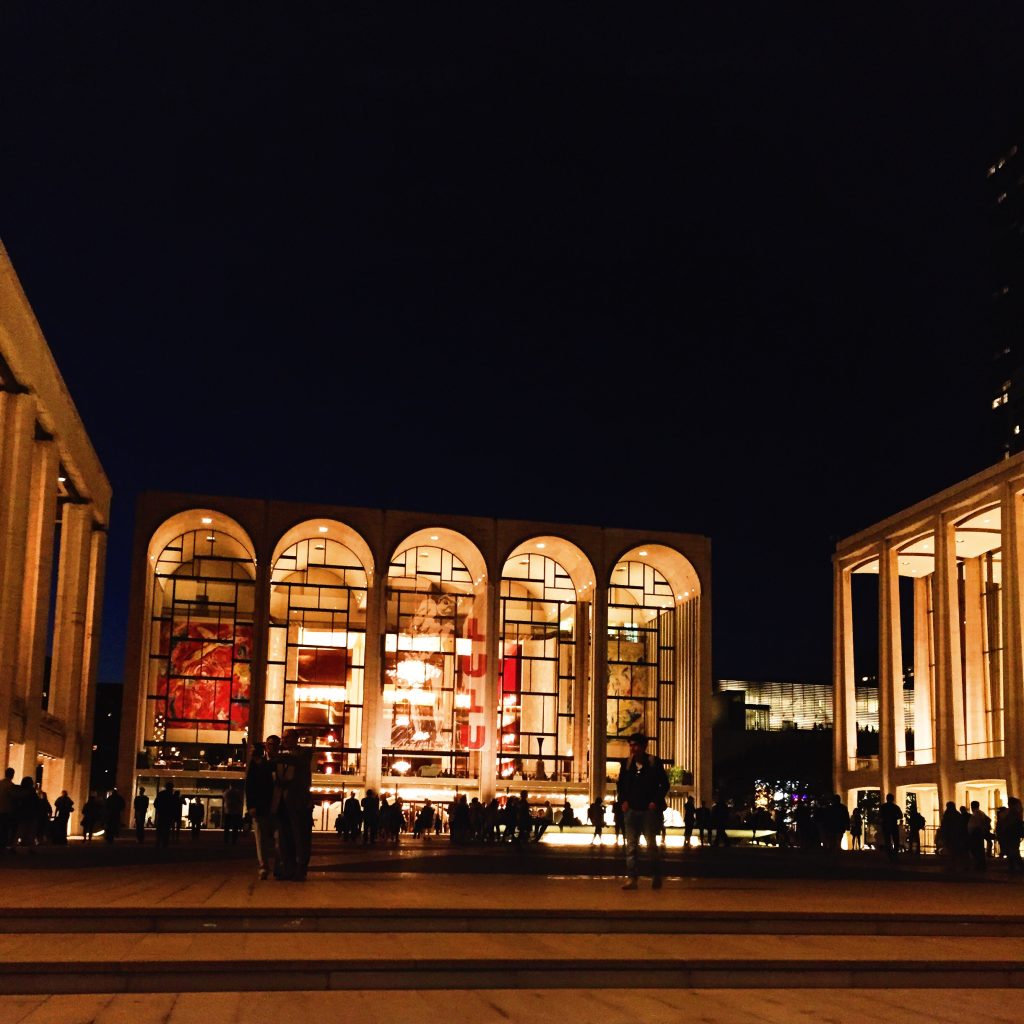 Two exciting things happened in New York this past Wednesday: the Mets won the National League pennant, and I saw my first performance at the Metropolitan Opera. Yes, that’s right. I missed seeing the Mets claim their first World Series spot in fifteen years, but it was worth it. Puccini’s Tosca was absolutely breathtaking.

My brother Michael (he’s the true opera buff in the family) and I have been trying to score tickets to the opera for quite some time now. I’ve lived my entire life in New York and have made my pilgrimages to the ballet, the symphony, Carnegie Hall, Radio City, and Broadway. Tickets to the opera, however, have always seemed elusive. Obviously, there’s the extravagant price tag. When you’re at the opera, two things are paramount: an excellent view and even better acoustics. The cheaper seats usually offer neither.

But even though we could only afford the cheap seats, Michael and I decided to hold out. If we were going to go to the opera, we wanted it to be a truly unforgettable experience. Last season, the Met gave away their rush tickets through lotteries. Michael and I must have entered every single one, but our names never turned up in the drawings.

Then something wonderful happened. This fall Michael enrolled full-time in college. And the Met unveiled a new program for full-time students: the ability to purchase student rush tickets online. For just $35, Michael was able to buy two seats in the orchestra section for a Wednesday evening performance of Tosca. He was nice enough to invite me along.

I was incredibly excited not only over the fact that we were finally going to the opera, but also that I’d been studying Italian and this was an Italian opera. There are individual display screens on the seat backs where you can choose to see the titles in English, German, or Spanish. For Italian language operas, there is also an option for Italian, which I eagerly selected.

Ultimately, if you’re a student in New York City who loves theater and classical music and rubbing shoulders with the upper crust, then you absolutely must take advantage of this fantastic opportunity. If you’re unfortunately no longer a student but still penniless from paying off your college debt, find a student that you can bribe to take you to the opera.

Five more tips if it’s your first time heading to the Metropolitan Opera:

The Metropolitan Opera season (like that of most opera houses) is usually comprised of a selection of fan favorites and more obscure titles. If you’re an opera buff, then you might be a little more adventurous in your operatic tastes. However, if you’re an opera newbie (like me!), I recommend choosing a well-known opera with arias that you might have already heard in pop culture. A little research beforehand, including reading recent reviews of the production, will ensure that you don’t end up disappointed. The Met usually has short clips from the current opera productions on their website.

For example, Michael and I read wonderful things about the Mets’ current production of Verdi’s Rigoletto, but it’s been updated from 16th-century Mantua to a 1960s casino. We wanted to see more traditional costumes and sets, so we opted for Tosca. Michael and I loved it, but I’ve read the sets are even more lavish in this season’s Turandot.

Ultimately, there are three things to consider when choosing an opera: music (do you tend to like listening to Italian over French or German? Or Mozart over Wagner?), singers (do you want to see a big name opera star?), and sets (do you want your sets extravagant or do you prefer avant-garde?). These are all a matter of preference, of course, but I’ve heard from friends who came back from the opera and hated it, and I really think they would have had a better experience if they had chosen their opera more carefully.

(Another aside: I’ll admit that while I was familiar with some of the music from Tosca, I did not know very much of the plot except that it was set in Rome during Napoleonic times and the antagonist was an evil police chief, Baron Scarpia. Frankly, I didn’t want to find out more of the plot. I preferred seeing the story come to life on the stage and keeping me in suspense. However, I did listen to several recordings of the arias and romanzas before the big day. You might like to have a more thorough knowledge of the history and plot of the opera you are seeing.)

There were student rush tickets available in two different sections of the theater. Michael and I weren’t sure at first if we wanted to sit in the rear of the grand tier or in row Z on the left side of the orchestra. We opted for the orchestra seats. Yes, that’s the 26th row, but we still found that we had a good view of the stage and excellent acoustics, even though we were slightly under the balcony. I read that the acoustics suffer the farther back you sit under the overhang. We walked up to the Grand Tier section and noticed that the balcony would give a better view of the orchestra (we couldn’t see the instruments from row Z). If you are even farther back than we were, there is always the option of bringing a pair of opera glasses (just a fancy name for a small pair of compact binoculars). You can also purchase them at the opera shop. Quick note here: Because Michael and I were sitting closer to the rear, we were able to leave the Opera House quickly after the final curtain call and hail a taxi right out in front within minutes.

There’s no dress code at the Met. But, hey, it’s the opera. Why not use it as an excuse to get dressed up? Lincoln Center plaza is gorgeous in the evening and inside the opera house there are massive red-carpeted staircases that are the perfect place for an Instagram photoshoot. I could count on my hand the number of people wearing jeans. Most operagoers were keeping it classy: suits and ties, skirts, dresses. I recommend dressing comfortably as the night will undoubtedly be long (Tosca lasted three hours), but fancy enough for a nice evening out. I wore a tweed blazer, a dressy white blouse, and a pencil skirt with ballet flats. Michael wore a suit and tie.

Part of the fun of seeing an opera is going out to dinner beforehand. Make sure you dine early enough so that you don’t miss the opening curtain. Michael and I ate at P. J. Clarke’s, which is right across the street from Lincoln Center. They are used to serving theatergoers so our meal came out in the blink of an eye. Yes, almost literally. Choose a restaurant that is near to the opera; they will have experience seating theatergoers quickly and preparing the food in time for you to catch your show. Michael and I finished our dinner in time to stroll around the plaza.

Tosca has two intermissions; both are a little over thirty minutes long. This is the perfect time to explore the Opera House: visit the other sections (we sneaked up into the upstairs balcony), buy an overpriced drink at the bar or get a free drink of water at one of the gold water fountains (Michael and I dubbed them the classiest water fountains in all of New York City), admire the mammoth Chagall murals, step out onto the outdoor terrace, visit the Met Opera shop, and don’t miss the various exhibitions of Met history scattered throughout the building, particularly in Founder’s Hall.

I hope this little guide will help you have a memorable time when you have the opportunity to visit the Metropolitan Opera. Wednesday was the perfect night for our trip: one of those warm October evenings that makes you nearly believe that winter is still a long way off. The performance was incredible. I can’t wait to go back.

What’s your favorite opera? Have you ever been to an opera performance?